When you hire a plumber, you don’t normally expect much drama. It’s an easy process: You hire the professional, they do the job, and you pay them. But the plumbers we’re looking at today decided to play by their own rules. It didn’t pay off, though; they’re all under investigation, and their careers are pretty much tanked. Let’s all point and laugh at these plumbers who tried to play the system, but failed.

We’re not sure what Joshua Veach of Oklahoma was thinking when he decided to steal $6,000 worth of tools and equipment from his employer. Maybe he wanted to sell them for some quick cash? Maybe he wanted to keep them for himself? Whatever the plan, it wasn’t a good one; he’s now awaiting trial for theft, and his bail was set at $25,000. 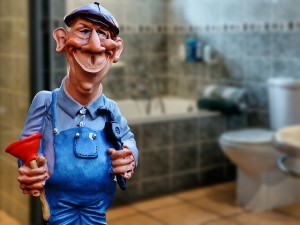 Jason Cooper of Australia is accused of making his payroll clerk do dishonest things. The clerk claims that Cooper made her submit false pay slips and employee records to the Trade Union Royal Commission. This deception stressed her terribly, causing debilitating anxiety. Why did Cooper decide to fake out the authorities? Apparently he wanted them to think he’d been following proper protocol by talking to and disciplining his workers before firing them. The investigation is ongoing.

A scammer went down to Georgia, looking for money to steal! At least, that’s what Rodney Morales’ accusers claim. The plumber is said to have taken money — up to $1,500 from one customer — for work that he never completed. The customers thought they were making a good choice by hiring Morales because of his online reviews. However, the BBB told the truth when it gave him an F rating.

Remember to check with multiple sources before hiring a professional. If you need plumbing services in Florida, and you want service you can trust, give us a call today!