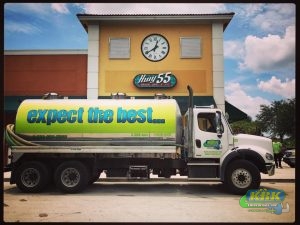 In the beginning, the corporation owned the land and operated two lime stabilization treatment facilities in Okeechobee County (172 acres off Eagle Island Road and 80 acres in Fort Drum). Liquid and solid waste from septic tanks and grease traps were screened, lime stabilization, and then land applied as fertilizer on the two pasture land properties. On February 12th, 1999, Paul Revels resigned as the Vice-President as sold his shares of stock to Marvin Kelly.

Mr. Gay and the previous owner of the Fort Pierce franchise, Robert Hinebaugh, had a franchise-to-franchise verbal agreement which basically established Bridge Road in Hobe Sound as the geographical dividing line between the two RR territories. Mr. Gay was interested in serving the customers on Jupiter Island and in Hobe Sound, but due to excessive travel distance, was not steadfast in servicing the remaining Martin County areas of Palm City, Sewall’s Point, Jensen Beach, Indiantown, etc. (everything outside the city of Stuart limits). Robert Hinebaugh attempted to have the franchise territories re-defined in writing for many years, but was never successful.

Loyal To Customers For Years

When RRC purchased the WPB RR franchise from Mr. Gay, they began to aggressively expand their services into Martin County and “reclaim” the territory and customer base which had gone un-serviced for fifteen years. To avoid conflicting with RRC’s contractual agreement in Martin County, the Fort Pierce RR franchise established a sister company, KRK Enterprises, Inc. (KRK) to service the plumbing, septic, grease trap, lift station, & backflow prevention needs. The new sister company, KRK, would no longer be burdened with the “territorial boundary restrictions” in Martin County, and gladly continued to service their establish customers under the new KRK logo.

KRK now provides a wide range of services including:

The Corporation also owns and operates a grease / used cooking oil recycling facility located in St. Lucie County. From wanting to service those who couldn’t be reached by other licensed clogged drain cleaners, to becoming one of the most dependable resources of grease trap maintenance and used cooking oil recycling, our history of KRK Enterprises, Inc. servicing the entire state of Florida is a daily reminder of our mission. To become part of our mission to service as many Floridian commercial business and residential homes as possible, call today! 800-330-7686